Is it just me or does being in therapy during the summer months feel eerily similar to the childhood game of monkey in the middle? Summer vacations (aka dreaded breaks from T), just like that game, often leave you feeling like the one thing you need in order to win is being kept away from you. You might get close, maybe even touch it for a little bit, but the ball just keeps going past you.

It’s like the little voice inside of your head is whispering ‘sike‘ just when you think you might have won the game. 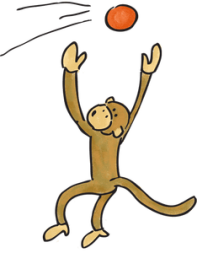 I’m starting to think it would have been a whole lot easier to just stay away from therapy until early August. T came back (of course he did) but it was only for two weeks and now he is gone again for 2 more weeks. I just don’t know if it’s ever going to feel okay when he goes away.

We talked about who I could contact if I needed someone when he was away. He mentioned his colleague again and said I could call her if I wanted to. I told him I needed to know the rules before I would even consider it, so we went over when I could contact her–basically there are no rules at all. She’s there even if I just need someone to sit with me and say nothing. I’m not sure if I’ll call her but at least I know the rules.

A lot has been happening and it’s hard to find a place to talk about it. With the past break and the current break and one more upcoming break before summer is done and the no contact and the family visit and the nightmares that have come back, it’s hard to feel a sense of calm. The short time we had together just didn’t feel anywhere close enough to what was needed.

The right people to share your stories with don’t come along very often. Nobody wants everything that comes with you when you grow up having a broken childhood. Not the living. Not the dead. Not the nightmares. Definitely not the trauma. No one wants to hear about the long nights spent hiding in a closet willing for the sun to come up and no one wants to talk about how their father terrorized them and their mother fucked them up and drank too much or how their sibling was a rapist or about how the pain from a lifetime ago still lingers in the back of their mind regardless of how many times they will it away. No, it just never seems appropriate to allow this kind of insight into your life with just anyone. You always feel strange, in a way you don’t know how to communicate, in a way you hope won’t make others walk away from you and deem you unlovable forever.

It never felt like a definitive thing – to know I could go back to safe people. Stability always had a cost and because of it I learned to never expect anything from anyone. But with T, a moment came when I let my guard down a little bit. A moment that might have meant nothing to someone else, but meant everything to me. The moment was something I had spent a lifetime longing for – a sense of belonging I could actually touch. A space between us that wasn’t that far, really, when I think about it. I’ve wondered countless times if what I found in T is something real, something tangible in another human being or if it’s just another bad dream. Love. Understanding. Safety. Those are not things that happen to bad people, to broken people, to people who come from a home like mine.

Before we said goodbye on Friday T said these words

I need to have a little faith. Faith that T will do what he says. Faith that he cares about me even when we aren’t together. Faith that he’ll come back just like before and the time before that. Faith that one day, everything will feel differently.